Mustang, the former Kingdom of Lo in northern Nepal is home to one of the world’s great archaeological mysteries. The region is known for it’s vast, mysterious, and nearly impossibly complex system of man-made caves. These mysterious caves nestled in rugged Himalayan terrain are around 10,000 in number. While some of them are easily accessible, others are too small to fit in a human.

Located at the height of 155 ft from the ground, these man-made caves are at least 2,000 years old but no one knows who built them or why. Or even how people climbed into them.

Some sit by themselves, a single open mouth on a vast corrugated face of weathered rock. Others are in groups, a grand chorus of holes, occasionally stacked eight or nine stories high, an entire vertical neighborhood. Some were dug into cliff sides, others tunneled from above. Some caves are even located on a single windswept rock and some were discovered to have been dug in such a way that it connects an entire neighborhood.

According to researcher, local used ramps or ladders to get to a level, and then the flats themselves. Inside the caves, vertical shafts have been found that connect the upper and lower levels together, and these likely had wooden ladders in them.

While exploring these mysterious caves in Mustang, the researchers found priceless 14th-century wall paintings which included a 55 panel depiction of Buddha’s life, almost 3000 years old ancient human remains and centuries-old hidden library consisting of 8,000 calligraphed manuscripts—a collection, most of it 600 years old, that included everything from philosophical musings to a treatise on mediating disputes.

Scientists divide cave use in Upper Mustang into three periods. As early as 1000 BC, the caves were used as burial chambers. During the 10th Century, the region is thought to have been frequently battled over, and consequently, placing safety over convenience, families moved into the caves, turning them into living quarters. By the 1400s, the caves functioned as meditation chambers, military lookouts or storage units as people moved into villages.

In 2010, a team of mountaineers and archaeologists uncovered 27 human remains in Samdzong’s two biggest caves. The bones date from the third to the eighth centuries—before Buddhism came to Mustang—had cut marks on them. Scientists believe that this burial ritual may be related to the Buddhist practice of sky burial. To this day, when a citizen of Mustang dies, the body may be sliced into small pieces, bones included, to be swiftly snatched up by vultures.

Seven hundred years ago, Mustang was a bustling place: a center of Buddhist scholarship and art, and possibly the easiest connection between the salt deposits of Tibet and the cities of the Indian subcontinent. Salt was then one of the world’s most valuable commodities.

Later, in the 17th century, nearby kingdoms began dominating Mustang. Economy of Mustang started declining when cheaper salt became available from India. The great statues and brilliantly painted mandalas in Mustang’s temples started crumbling. And soon the region was all but forgotten, lost beyond the great mountains. 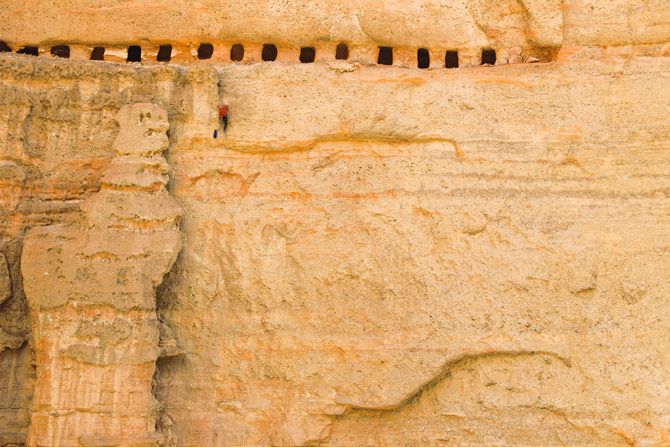 Even after the discovery and finding a little bit more about these caves many questions remains unanswered like “Who built them? Who lived there? What was the purpose of building them so high off the ground? How did they get inside the caves if it is so hard for the explorers to get to even with the help of modern equipments?”