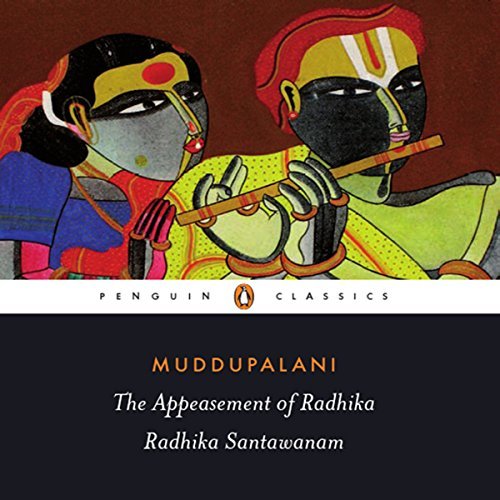 The Rādhikā-sāntvanam is a poem composed by Muddupulani concerning the marital relationship of Deity Krishna, Radha And Ila reflect jealousy of Radha. It includes 584 Poems divided into 5 sections. It also reflects her own sexual experiences and desires. The precise date of this masterpiece composition is still unknown, but it was noted to be between 1757 and 1763. Some excerpts from her poem do reflect her characteristics like below;

Which other woman of my kind has

felicitated scholars with such gifts and money?

To which other women of my kind have

Which other woman of my kind has

won such acclaim in each of the arts?

You are incomparable,Muddupalani, among your kind.[…]

A great spirit of generosity,

when she is praised by kings.

Muddupulani claimed she got this concept when Krishna appeared in her dream and suggested her on this subject. Muddupulani had her own thoughts of sexual desires and experiences which let her to wrote about 584 Poems in this masterpiece. It belongs to the śṛṅgāra-kāvya or śṛṅgāra-prabandham genre of Telugu literature evoking Sringara Rasa (one of 9 rasas).

Later on, This world dominated by men degraded her work by calling her ”Muddu Pillai” like she were a man as for woman or for her kind of devadasi at that time it was not acceptable. Therefore, her work i.e.The Rādhikā-sāntvanam classified as a scandal instead of a masterpiece by woman of her own thought. This led to the controversy in the early 20th century because of its sexual experiences and women’s initiative taken in sexual activities.

It also tells the tale of Radha who brings up Ila from her childhood and gives her in marriage to the Krishna. It includes the stages of Ila’s puberty, Radha giving advice to Ila on lovemaking with the Krishna and his handling in the process. Apart from this, it also states the pain of Radha who gave everything to him but he abandoned her and state the feeling of separation from whom she desires the most in this world. Later on, Krishna Appeases and comforted her gently, this is from where the title originated from. Some of the excerpts from the poem reflecting this relationship;

If I ask her not to kiss me,
stroking on my cheeks
she presses my lips hard against hers.
If I ask her not to touch me,
stabbing me with her firm breasts
she hugs me.
If I ask her not to get too close
for it is not decorous,
she swears at me loudly.
If I tell her of my vow not
to have a woman in my bed,
she hops on
and begins the game of love.
Appreciative,
she lets me drink from her lips,
fondles me, talks on,
making love again and again.
How could I stay away
from her company?

To continue learning about here following are some resources;