The Temple town of Maluti

Maluti temples are a group of 72 terracotta temples located in the Maluti village near Shikaripara in Dumka District on the eastern part of the Indian state of Jharkhand. Initially, there were 108 temples clustered in a radius of just 350 metres. Out of these, 36 temples have crumbled to dust over passage of time. The remaining ones are in various stages of decay.

The terracotta temples in the village Maluti are built in four groups and they are dated between 17th and 19th centuries.

History of the temples is directly linked to the kingdom of Maluti, then known as “Nankar raj” that was granted to a Brahmin named Basanta by the Muslim ruler Alauddin Husain Shah of Gaura (1495–1525). Son of a poor Brahmin Basanta managed to catch the pet hawk of the sultan and gave it back to the sultan. In lieu of the hawk (Baj), Basanta was given the kingdom. Hence, the king was called Raja Baj Basanta. The capital of Baj Basanta dynasty was in Damra. Later it was shifted to Maluti.

How Maluti — the capital of Baj Basanta dynasty — turn out to be a ‘temple city’ is also an interesting story. Instead of constructing palaces, the Raja Baj Basanta built temples.

Subsequently his family got divided among four clans and they continued to build the temples, competing with the others. In the end, it turned out be a unique temple village. The name Maluti is said to be derived from Mallahati, the Malla Kings of Bankura.

Today the importance of the village Maluti lies in accommodating 72 ancient temples. Initially there were 108 temples built in the village. Later generation could not maintain such huge number of monuments and most of them were left uncared for.

Of the 108 temples, only 72 still stand, but in a semi-dilapidated condition; the other 36 temples have been lost.

Maluti’s temples are decked with detailed and intricate terracotta carvings based on Hindu mythologies, especially the epics – Ramayana and the Mahabharata.

The architectural style of the temples is predominantly the regional Bengali style which flourished all over Bengal in that period.

At some places social scenes are also depicted like tilling of land, worship in progress, sacrifice of goat etc. Some temples have inscriptions which help in reconstructing the history of the temples as well as the socio- politico scenario of the period. The inscriptions are in early Bengali script which is a mixture of Sanskrit, Prakrit and Bengali.

The Maluti temples were not known to the outside world till by A.K.Sinha, Director of Archaeology, Government of Bihar publicized them, for the first time in 1979.

Global Heritage Fund has declared this site as one of the world’s 12 most endangered cultural heritage sites.

In 2009, an NGO called Save Heritage and Environment (SHE) contacted the Global Heritage Fund (GHF) to help conserve this unique temple village. Not far long after, GHF declared this village one of the world’s twelve vanishing cultural heritage sites- however, Maluti is the sole site from India on that list which received concern (SHE.)

Today, neglect including poor water drainage, overgrown vegetation, and vandalism are taking a toll on the entirity of the temples. But “with proper restoration and maintenance, the temples have the potential to be a major source of economy in the small town of Maluti,” the Global Heritage Fund says in its report concerning the Maluti Temples. 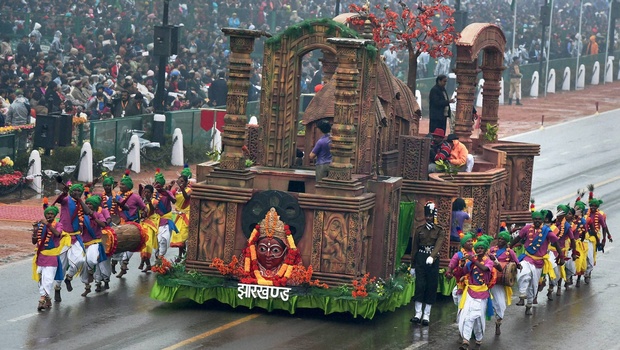 Jharkhand tableau on display during the 66th Republic Day parade at Rajpath in New Delhi showcasing the temples of the village Maluti on 26th January 2015. – img source

The terracotta temples of Maluti are slowly and steadily walking the revival talk. Soon after the award-wining depiction of Maluti Temples during Republic Day parade on Rajpath in New Delhi, the government resolved to take up its conservation and on June 25 2015 an MoU was signed between the state government and the Indian Trust for Rural Heritage and Development (ITRHD), for conservation, promotion and renovation of the temples.