On 12th September, 1990 Boise TV station aired the story about the discovery of a giant pictograph about a quarter of a mile wide appearing in a dry lake bed east of Steens mountain, about 70 miles S.E. of Burns, Oregon in United States. The glyph had a machine like precision in its shape and clarity of lines and it was quickly identified as perfectly formed, the ancient Hindu meditation device ‘the Sri Yantra‘ identical in shape and proportion, and in its geometrical properties. This symbol was over a quarter of a mile in length, and consisted of 13.3 miles of lines, was scored into the hardpan at a depth of 3 inches and were 10 inches wide.

It was reported to have been discovered by Idaho Air National Guard’s pilot, Lt. Bill Miller, while on a flight on 10th August 1990. Interestingly, the skies above the Sri Yantra are regularly used as part of the Idaho Air National Guard’s pilot training area. There had been no trace of this formation. Neither had any of the other pilots of the Idaho National Guard observed any unusual activity or a design-in-process in this area. The etching simply appeared one morning.

Two researchers, Don Newman and Alan Decker visited the site on September 15, 1990, and reported the symbol as being furrowed into the dry lake bed about 3 inches deep, noting that the area was noticeably missing any signs of tire tracks or foot prints even though their own tire tracks left 1/4 inch deep marks on the crusty surface of the dry lake bed. 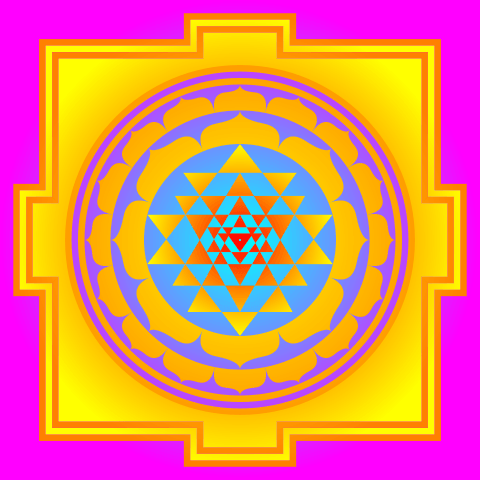 Who created Sri Yantra at Oregon?

The Sri Yantra design has a degree of complexity and a level of symmetry that makes it difficult to recreate its design even on paper, let alone furrow an enormous replication of it on a dry lake bed. The shape produced by the lines in this massive Sri Yantra at Oregon, could not be deciphered while standing on the ground. In fact, the shape only made sense when viewed from a height of a few thousand feet above. There was therefore a good deal of speculation that the glyph was not man-made. It is not visible today (Lat, Long: 42.738105,-118.314011), which fuels conspiracy theories about the aliens imprinting it in the sand and the military destroying it.

About forty days after the appearance of the glyph, a group of four people, headed by a Bill Witherspoon, claimed that they had etched out the pictograph, over a period of 10 days, by pulling a garden cultivator like a plow over the dry lake bed. He said that they chose the site for its beauty and remoteness. The design was made without modern machines or tools and they left the site on foot in order to keep the area vibrationally pure.

However, Bill and his group failed to offer in-progress proof of their ‘creativity’. When asked to demonstrate how they had gouged out 13.3 miles of lines, 3 inches deep and 10 inches wide, Bill Witherspoon’s team only managed to gouge out a ½ inch deep line with great exertion. The line lacked neatness, and, the displaced soil fell unevenly on the two sides of the carved line. No one believed anymore that the original glyph could have been created by using tools such as garden plows.

Bill Witherspoon spent the following couple of years monitoring the changes in the formation. In his article “Art as Technology: Oregon Desert Sri Yantra“, Bill claimed that as soon as they had finished the design the weather in the valley changed and Rain fell one hour after completion of design. Remarkably, the lightning and the rain were limited only to the small valley where we were working. The ranchers noticed a continued increase in the valley’s rainfall. This was accompanied by increased vegetative growth, as well as increased populations of several plants and three animals species that were not previously common in the valley. There was an increased feeling of harmony in the area and two years later, with the lines almost gone, the structure of the soil had changed. The soil changes were limited to the forty or so acres of the design and were most pronounced in its center. The overall result was increased rainfall and more organic matter.

The Sri Yantra also called Sri Chakra is a beautiful and complex sacred geometry used for worship, devotion and meditation. It has been in use for thousands of years and it’s origin seems unknown.

The Sri Yantra in diagrammatic form, showing how its nine interlocking triangles form a total of 43 smaller triangles.Image Source

In Vedic texts, the Sri Yantra is defined as a device formed by nine interlocking triangles, with a perfect ratio of 3.14 or the divine number, Pi. It is composed of a square on the outside with four projections forming a T-shape structure, circles, a row of Lotus petals, and triangular forms inside the Lotus petals.

Every triangle is connected to the others by common points and this is the reason why it is so difficult to draw correctly. Changing the size or position of one triangle often require changing the position of many other triangles. There a many variations and many different methods to draw the Sri Yantra. Nobody seems to know what the original configuration is.

The Sri Yantra is variedly described as a visual representation of the sound ‘OM‘. It is thought that this ancient symbol was not intellectually constructed, but that it came to a Yogi in deep meditation as a representation of the primordial sound, OM. This symbol, along with sounds like OM have incredible healing powers if you just know how to use them correctly.