The skill and the technology possessed by ancient Indians may not be agreed by present day ‘secular’ historians, but the truth cannot be suppressed for long. The Iron Pillar standing tall at Mehrauli, Delhi is stands proof of how advanced science was in ancient India.

The pillar which has not rusted for the past 1600 years has been found to be the handiwork of a great Vishnu Bhakth namely Chandragupta II Vikramaditya. The inscriptions on the pillar are in Sanskrit and refer to the mighty king. Inspite of all these evidences, school children will still continue to be taught that it was the Mughals who were responsible for the pillar. Yes, the Mughals were responsible for stealing the pillar from its original place!

Details of the top of iron pillar, Qutub Minar, Delhi.

It is arguable that Indian scientists and technologists were producing high-quality corrosion-resistant iron and steel as early as 400 AD. There is considerable evidence of the ingenuity of ancient India’s metallurgists in the form of permanent installations, museum exhibits and pillars installed in places of worship across the country. The most famous of these – one which has defied and confounded students and professors of metallurgy in India and abroad — is the 32 ft high pillar of rust-free iron sited contiguous to the 239 ft tall red sand stone in Qutab Minar. And the wonder of this metallurgical marvel is that it has not rusted or succumbed to atmospheric corrosion despite being unprotected against the elements for over 1600 years. During the past two centuries since the existence of this wonder pillar was brought to public attention by British archaeologist James Prinsep in 1817, over 250 books have been written on this subject. The first systematic research was done by British metallurgist Sir Robert Hodfield in 1912, and since then several scientists from across the world have researched, presented papers and written books on the pillar.

“The iron pillar in Delhi fascinates scientists all over the world, due to its excellent resistance to atmospheric corrosion. This is an attempt to explain the story behind the pillar in a very simple manner, so that a lay reader can appreciate the history, science and technology of the iron pillar. In addition the artistic merit of the pillar is highlighted …It is sincerely hoped that the imagination, especially of the young readers, will be fired by the facts and ideas presented in this book,” writes Balasubramaniam.

The Story of the Delhi Iron Pillar traces the history of this metallurgical wonder and recounts that it was engineered in Udayagiri. The author reveals that the iron pillar was originally installed atop a hill near Udayagiri in the hinterland of Madhya Pradesh during the reign of Chandragupta II Vikramaditya (374-413 AD) of the Gupta dynasty. The original site of the pillar was the exact location where the imaginary line that is the tropic of cancer crosses India from where one can observe the sun rising in the east and setting in the west on spring and autumn equinox days. However in 1234 King Iltutmish (1210-36 AD) the third sultan of Delhi’s slave dynasty captured Udaygiri and transported the pillar to Delhi as part of his victory booty. 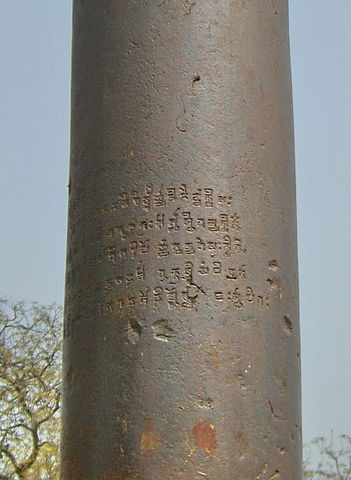 The pillar carries a number of inscriptions and graffiti of different dates which have not been studied systematically despite the pillar’s prominent location and easy access. The oldest inscription on the pillar is in Sanskrit, written in Gupta-period Brahmi script.This states that the pillar was erected as a standard in honour of Viṣhṇu. It also praises the valor and qualities of a king referred to simply as Chandra, now generally identified with the Gupta King Chandragupta II. Some authors attempted to identify Chandra with Chandragupta Maurya and yet others have claimed the pillar dates as early as 912 BCE. The dating of the inscription is supported by the nature of the script and the Sanskrit poetics, both of which reflect the conventions of Gupta times.

That the Delhi iron pillar is indeed an engineering marvel was conceded by the president of the Institute of Mechanical Engineers, London. The incumbent professor of materials and metallurgical engineering at IIT-Kanpur, Balasubramaniam also unravels the mystery of the amazing durability of Delhi’s iron pillar. According to him unnamed engineers of that era used the film forming quality of phosphoric acid to create a thin protective layer of ‘misawite’, a compound of iron, oxygen and hydrogen to prevent rusting and corrosion. This protective film encapsulated the pillar within three years after its erection and has been growing imperceptibly since. Today 1,600 years later, the film is of a thickness of one-tw