Solanki Dynasty was established by Mulraj that ruled the western and central India during the 10th century to the 13th century AD. This was the last Hindu dynasty. Mulraj Solanki’s reign marked the start of the most glorious period in the history of Gujarat during which Gujarati culture flowered as manifested in art, architecture, language and script. It is described as the golden period in Gujarat chequered history.

The enormous seven storey step well, Rani ki Vav, in northern Gujarat was recently declared a World Heritage Site, bringing into limelight the superb heritage of Solanki Dynasty that ushered a golden period for architecture in Gujarat during the 11th and 12th centuries. The Solankis commissioned imposing forts at Dabhoi and Jhinjwada with exquisitely-carved gateways, some of India’s finest Hindu temples like Sun Temple at Modhera and Rudramalaya at Sidhapur as well as beautiful Jain temples at Palitana, Girnar, Taranga, Kumbhariyaji and Mt Abu.

A distinctive feature of this period was the creation of water—retaining structures like kunds (stepped tanks), Vavs (step wells) and talabs (lakes) to tap Gujarat’s limited water resources. The step wells are like underground palaces with beautiful sculptures and carved balconies string-coursing the staircases leading to the water level.

Rani Ki Vav is one of the largest Step Wells in India, with a seven storey stairway

Rani ki Vav is located in Patan in an area called Anhilawada Patan which was Gujarat’s capital during the Solanki Rajput period. The impressive step well has a massive subterranean structure with a stairway going down seven storeys, past covered landings that must once have been resting and gathering places for travelers and locals. Said to be built in the 11th century by Queen Udaymati, widow of King Bhimadeva, the step well has hundreds of superbly—crafted stone structures along the walls depicting Vishnu avatar, Goddess Durga and other deities. Even the towers of multl-layered pillars are embellished with fine carvings.

Some of the carvings depict reclining Lord Vishnu over the well shaft. At the base of the well, Lord Ganesha is carved in niches. As you go down each storey, the well gets noticeably cooler. Chambers built into the well walls must have been locations for queens to get away from the hot weather and relax. Near the step well is Sahasralinga Talalo, an artificial lake surrounded by carved Shiva Shrines.

The 11th century Modhera Sun temple is an architectural Masterpiece

About 40 km from Patan, Sun Temple of Modhera was built in 1026-27 AD by Bhimdev Solanki and ranks among the architectural masterpieces of the period. In front of the temple is a huge rectangular tank, Surya Kund, surrounded by steps on all sides. On the steps are a number of small shrines which form groups at the center of each side. Behind the tank rise finely-carved pillars of what was once Torana, an arch spanning carved columns at the temple entrance. The entrance hall is 52-pillared portico with friezes depicting scenes from the Ramayana and Mahabharata.

Withing the mandapa or pillared entrance hall, 12 adityas set into niches in the wall portray transformations of the sun in each month – representations typical of Sun Temples. The temple was positioned so that the rising sun during the equinoxes entered the door to light up the bejewelled idol which is now missing. It is said to have been taken away by invaders. The temple is not a living shrine. The exteriors are richly carved with deities and their Vehicles, animals, Voluptuous maidens, complex friezes and some erotic sculpture. Part of the roof is broken but the remaining part of this structure is filled with impressive sculptures.

From Modhera, you can continue to Vadnagar, an important city during the Solanki period. The best- known Vadnagar landmark is Torana which comprises a pair of profusely—carved columns between which spans an equally ornamental archway that was one of the ceremonial gateways of a 12th century temple. Now two Toranas are extant in Vadnagar. The town itself is surrounded by a historical wall with carvings dating to the 12th century.

The Sharmista Talao is considered a fine example of the Solanki period water-retaining structures as it continues to provide water to Vadnagar, past havelis with carved balconies on finely-carved brackets. Near the lake is the samadhi (memorial) of Tana and Riri, two sisters who sang Raag Malhar to cure Tansen of the terrible fever he suffered from after he sang Deepak Raag in King Akbar’s court.

Excavations around Vadnagar have revealed a Buddhist site that was probably the town of Anantpur described by chinese traveller Hleun—Tsang as a wealthy place with viharas. Buddhist sculpture in Mathura style, toys and utensils have also been found.

From Vadnagar, the road runs north to Taranga hills. Set among huge boulders, Ajitnatha Temple is enclosed by a wall erected by Raja Kumarapara who reigned in the 12th century. The temple is large and well- preserved, with beautifully executed carvings of maidens and musicians running along its base and main mandapa which is crowned by a clustered shikhara tower.

North from Vadnagar, the Kumbharia Jain complex lies on the outskirts of the pilgrimage town of Ambaji. This complex was once an important religious centre of solanki Ralputs, with five temples standing testimony to its glory. Built between 1062 and 1134 AD, the Five temples are breathtaking in the quantity and quality of sculptural ornamentation.

The corbelled ceilings in concentric circles, sculptured panels and densely-carved columns speak volumes about the artistry of the marble carvers of the period, during which the outstanding temples at Dilwara in Mt Abu were also built. 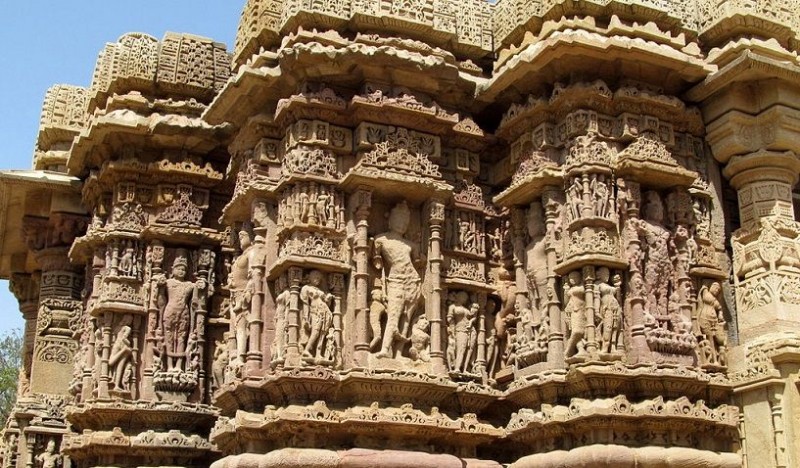 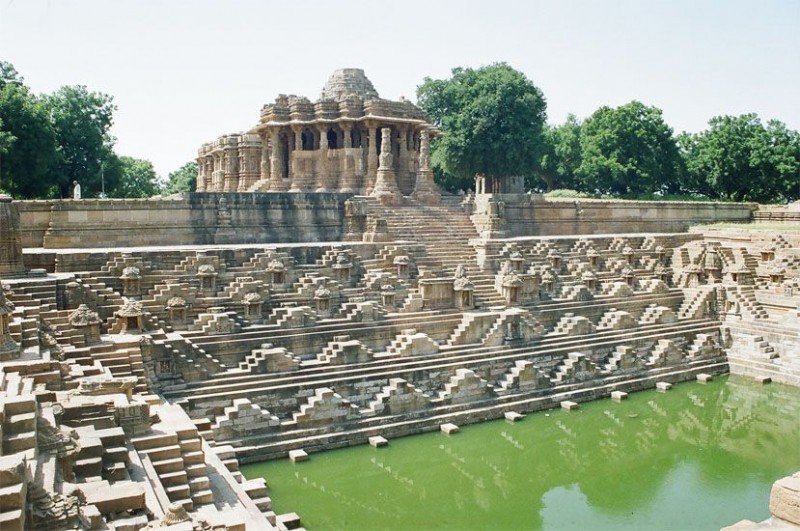