When most of us were growing up, we learned about a handful of man-made wonders of the world such as the pyramids in Egypt, the Colosseum in Rome, and the Great Wall of China. One that may have slipped right past you could have been the Kailasa Temple in Maharashtra, India. This temple is the world’s largest monolithic structure carved out of one single rock.

The Temple  has fascinated researchers and tourists for centuries. It is a breathtaking construction that points out that thousands of years ago, ancient cultures were far more advanced than what mainstream scholars are crediting them for. Everyone is trying to understand how the temple was built, cut out of the rocks, without the use of ‘modern’ technology.

Kailasa Temple is one of the 34 monasteries and temples that constitute Ellora Caves. They were dug side by side in an area of 2 km in the wall of a high basalt cliff of the Sahyadari Hills. The temple – cave number 16 – has traces of Pallava style and bears resemblance to Dravidian architecture for its workmanship and sculptural ornamentation of rock-cut architecture.

Dedicated to Hindu Lord Shiva, the temple was built in 8th century by the Rashtrakuta king Krishna I. But looking closely at the many symbols and codes at the Kailasa Temple, their origin point to an unknown past, though the sculptures of the deities, celestials, pillars, pots and animals seem to have been done in around the fifth and tenth centuries AD.

Many researchers believe that the builders of the Kailasa temple used a vertical excavation method in order to achieve what they did. They started at the top of the original boulders and worked their way downward carving out one of the most fascinating ancient temple complexes on the planet. But how did they do it? What did the ancient builders of the Ellora caves use to excavate and build?

Mainstream scholars indicate that the caves were built with the use of hammers, chisels, and picks, thousands of years ago. The construction of the temple began in 757 CE and was completed in 783 CE.

According to Archaeologists over 400,000 tons of rocks were scooped out which would have taken not years, but centuries of human labor to construct this monolithic structure. Historians have no record of such a monstrous task and they think that it was built in less than 18 years.

Entire Temple covers an area twice the size of the Parthenon on the Acropolis in Athens, Greece. It is one of the largest structures in the world, rivaling even the Taj Mahal in Agra.

Even the sculptures at Kailasa Temple are carved from the same piece of rock as the rest of the temple. Most of the deities on the left side of the temple’s entrance were Shaivaites while those on the right are from Vaishnava community. A three-floor high columned arcade edges the temple courtyard.

The Kailasa Temple is sometimes called the Kailashnath Temple, and was designed to resemble the sacred Mount Kailash located in Tibet, which is said to be the abode of the Lord Shiva.

The two structures in the courtyard, as per traditional Shiva temples, have an image of sacred bull, Nandi, facing the Shivalinga. The Nandi mandapa and main Shiva temple are 7 m tall and built over two floors. Both are solid structures with elaborate illustrative carvings. The base level gives an effect as if elephants are holding the entire structure.

Originally, this structure was coated in a thick layer of white plaster so that it appeared to be covered with snow like the sacred mountain; some traces of this plaster remain today.

One of the noteworthy structures in the temple is of demon king Ravana attempting to lift Mount Kailasa.

Ellora Caves remained in oblivion for several centuries but the cave temples of Ellora were known to the civilised world through ages as an example of Indian religion and art. The Baroda Copper Plate grants of Karka II refer to the magnificent excavations at Elapura (ie Ellora). Arab traveller Al Masudi and historian Farishta were two early authorities of the Muslim period to record Ellora in their accounts.

Mugahl King Aurangzeb who destroyed thousands of Hindu temple, also tried to destroy Kailasa temple. In 1682, he ordered that that the temple be destroyed, so that there would be no trace of it. Records show that a 1000 people worked for 3 years, and they could only do a very minimal damage. They could break and disfigure a few statues, but they realized it is just not possible to completely destroy this temple. Aurangzeb finally gave up on this impossible task.

Kailasa Temple among the caves also stands out as the highest architectural attainment during the rule of Rashtrakuta dynasty. Thousands of sculptures, drawings and inscriptions in Ellora exude artistic richness and philosophy making the caves a major achievement of ancient Indian civilisation. 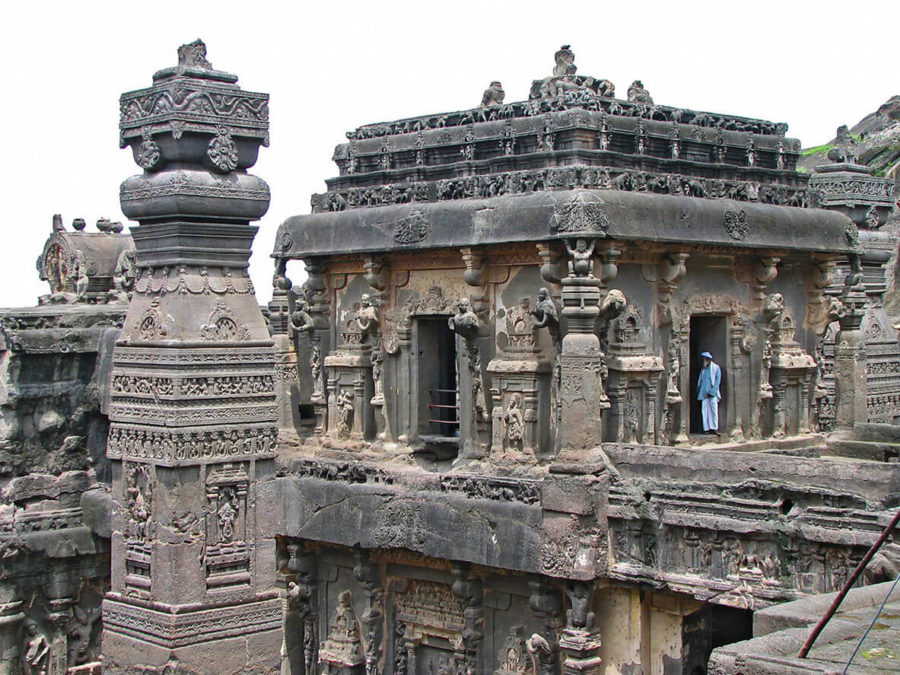