Archaeological findings and scientific data have indicated that Rakhigarhi had been the more important centre of the Indus Valley Civilisation than the townships of Harappa and Mohenjo Daro located in Pakistan.

Excavations and the study of the findings have unfolded a rich past: engraving, cutting, or polishing of stones and gems was the most developed handicraft in Rakhigarhi, considered the centre of a large-scale industrial activity 5,000 years ago

The team of archaeologists revealed that the excavation at this site is all set to change the view that Mohenjo Daro was the capital city of the Indus Valley Civilisation.

“Instead, the scientific data collected on the basis excavations here have strongly pointed that Rakhigarhi, a metropolis, was perhaps the capital of its times about 5,000 years ago,” said Prof Vasant Shinde, in charge of the excavation and Vice Chancellor of Deccan College, Pune.

Deccan College and the Haryana archaeological department have been jointly carrying out the excavation at the site from last three years. To prove his point, Prof Shinde said this site was spread in over 550 hectares, which is about double than that of the Mohenjo Daro site, which was considered the biggest site till now.

“We have collected evidences of massive manufacturing and trade activities in this town, which revealed the economic organisation and the foreign links of people here. They had trade links with people in Rajasthan, Gujarat, Baluchistan and even Afghanistan. The city flourished during the early Harappan era dating back to around 3,300 BC and existed till 2000 BC,” he said.

Moreover, the DNA samples collected from the skeletons at the cemetery here are set to crack a major mystery surrounding their lives, character, diseases and race of the people who lived here 5,000 years ago. 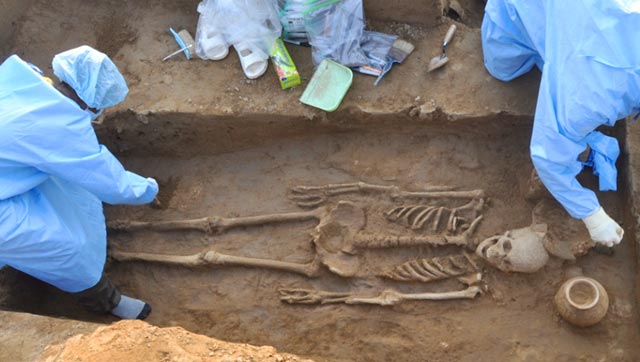 “Scientists have, for the first time ever, succeeded in extracting DNA from the skeletons of the Indus Valley Civilisation. More skeletons have been found during the ongoing excavation season from mound no.2 for further analysis. Three different institutes of world repute are conducting the DNA analysis for a foolproof study, so that there is no scope of any contradiction,” Prof Shinde said.

He said this was the best and most unexplored site related to the Indus Valley Civilisation so far. So much material is available here that it would take 100 years to complete the study on uninhabited mounds on the outskirts of the village. The state government had decided to set up a museum, research centre and a hostel for the researchers in the village.

An archaeological survey of India (ASI) report too pointed out that a huge number of stone beads and beads of metal, including gold, indicated that Rakhigarhi was the biggest bead manufacturing and trading centre of the contemporary world. This also shows the social and economic organization of local people. Rakhigarhi has yielded a large collection of beads made of stones, semi-precious stones and even metal like gold.

The volume of beads at Rakhigarhi indicated that this could have been a centre of manufacturing. The ASI excavation had retrieved 11421 beads in the last 13 years from 1997 from Rakhigarhi.

Democracy has roots in Harappa 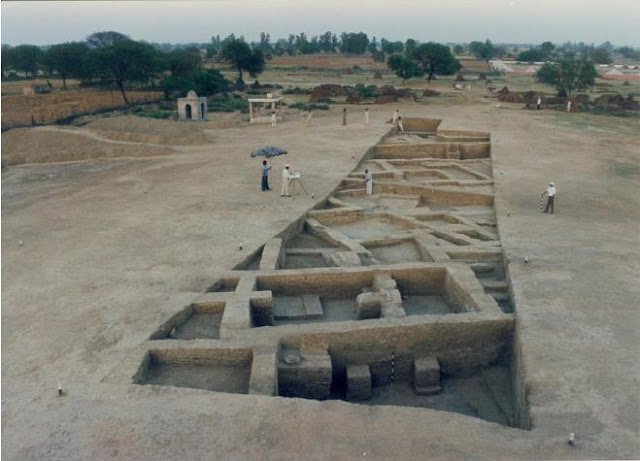 The concept of democracy and welfare state has their roots in Indus Valley Civilisation, so suggest the analysis of two-year excavation at an ancient Harappan site in Hisar’s Rakhigarhi village. The excavation points out that the panchayat system is 5,000 years old.

The evidence of a city state or rule of a king like in Egypt or Mesopotamia was not found anywhere in Harappan sites across the Asian subcontinent.

“We found no palace-like structure or evidence of a rule of a king anywhere in Harappan sites. Unlike Egypt, people of Indus civilisation did not waste their resources and forced common people to create structures such as pyramids which symbolise slavery,” said Arvind Prabhakar Jamkhedkar, Chancellor, Deccan College.

He said civil engineering and houses built of bricks were first conceptualised during the Indus civilisation and the technology had traveled to other contemporary civilisations. Cross-bricked technique was used in Egypt during 3000 BC. It was prevalent in Indus during 5000 BC.

Jamkhedkar said the Indus civilisation had flourished more in the Saraswati river basin than near the Indus river.