The monk, or lama, known as Sangha Tenzin is probably the only mummy in India to have undergone natural mummification. Buddhist monk remarkably preserved because he started the mummification process while still living.

In 1975 an earthquake in northern India opened an old tomb containing the mummified body, identified as that of monk Sangha Tenzin, who had given up his life while meditating and is more than 500 years. It was found inside a tomb at Gue village in the cold and remote Spiti district of Himachal Pradesh, about 6000 metres above sea level.

In 2004, the local police excavated the tomb and removed the mummy. The mummy is remarkably well preserved, with skin intact and hair on his head. He died in the seated position, with a rope around the neck and thighs (an esoteric practice recorded in few Buddhist documents).

The carbon dating on mummy showed that the mummy is 550 to 600 years old, but according to locals, it is much older than 600 years.

The Gue Lama mummy is India’s one and only mummy.

Monk Sangha Tenzin gave up his life during meditation to save the village from the rise in Scorpion problem. According to locals, when Sangha Tenzin soul’s left his body a rainbow appeared in the sky and all the scorpions disappeared from the village.

The process of mummification of this mummy is natural and no chemicals have been used to preserve it. The cold and remote habitat of Spiti helps in its preservation over the period.

The mummy of Sangha Tenzin is now on display in a temple in Gue, two miles from where he was excavated, in the Himachal Pradesh region of India, bordering Tibet. Controlled by the Indo-Tibetan Border Police and isolated in the Himalayas, the town is very difficult to reach. The temple where the mummy rests is open to the public, if you can get there.

Gue also straddles an ancient trading route over which spices, wool, salt, precious stones and sugar moved between India and Tibet. Monks and high Lamas frequented this route. The town is about 30 miles from the Tabo Monastery that dates to 996 CE. 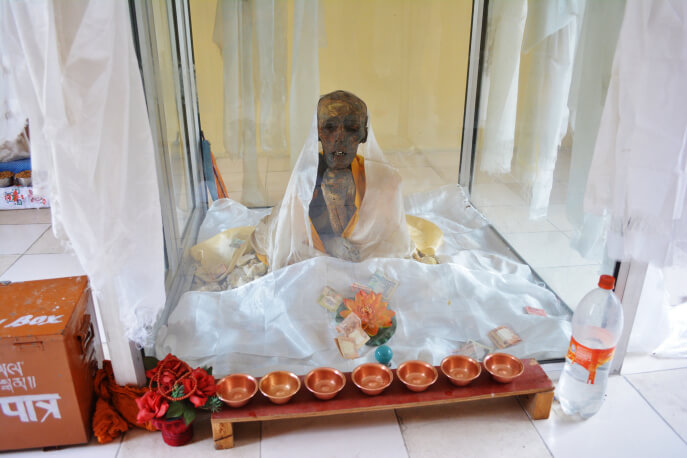 Natural mummification is very rare, requiring conditions of extreme temperatures and dry air to preserve the body. Most mummies that we’ve seen (in textbooks and museums) were mummified with a chemical process called embalming and then wrapped in linen.

But Buddhist monks of Japan and Tibet have a unique method of mummification. When the monk is alive, he begins a slow process of starvation and ceases to eat barley, rice, and beans, which add fat to the body. Also, in preparation for death, he runs candles along his skin, drying it out. The monk dies of starvation in a seated pose. Fat putrefies after death, and by removing the body of fat, the monk can be better preserved. Following his death, he is then placed in an underground room for three years, to continue drying out before again being treated with candles. The monk becomes a statue in prayer. Less than thirty of these monks have been found around the world, most on the main island of Japan, Honshu.