Indus valley civilization is a rich civilization and one of the most important civilizations that existed in the world. Ancient India during the Harappan era had one of the largest populations in the ancient world, far greater than the Middle East or Europe.

Mysteries that are yet to be solved

34. We are not sure what happened to them

There are several theories as of what happened to the inhabitants of Indus Valley civilization. But scholars are certain about one thing- it wasn’t invasion, disease or similar catastrophe that wiped out the entire civilization. Instead, the population of these cities declined gradually until they were finally deserted. It is quite possible that these inhabitants migrated to different regions in search of better land and resources. There are various reasons that have led to the decline of the Indus Valley civilization.

35. Exact use of the seals is still uncertain

More than 4000 flat, rectangular stone tablets called seals have been found. Seals made of at least a dozen other materials are also found. The seals bear the images of animals, god-like figures, etc., and inscriptions. Some of the seals were used to stamp clay on trade goods, but they probably had other uses too. It is difficult to say exactly what was the purpose of these ‘seals’ when the inscriptions have not yet been deciphered.

36. The Indus Valley Script has not been deciphered yet

At least 400 different symbols have been identified inscribed in various objects. These symbols usually appear in strings of 3-20. Despite best attempts by scholars have not been able to translate or even interpret them in any way. This is one of the most important reasons why we know very little about this civilization.

Some scholars even argue that whether these symbols should even be considered as a script since no instance of any text longer than 20 symbols have ever been found. Others believe that these symbols refer to only names and do not give any real meaning.

Computer analysis of these scripts has revealed that these symbols are a mixture of sounds and concepts like the Egyptian Hieroglyphs. However, due to lack of any medium to translate the language it still remains a mystery. 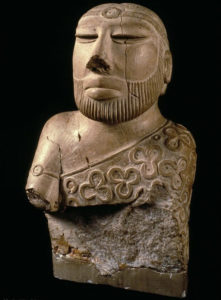 The ‘Priest-King of Mohenjo-Daro’ statue, from the Indus Valley Civilization

One of the factors that make this civilization so unique and that has surprised the scholars is that there has been no mention of any ruler or powerful authority throughout the region. Neither do we know anything about their governing system. Although it is very clear that it is unlikely that such an organized and systematic society can exist without any local and central control, these cities show very little or no evidence of it whatsoever.

The closest depiction of a figure is a terracotta sculpture of what is believed to be the priest-king. The king or the ruler is totally absent from the art or any other form of depiction.

38. Absence of any monumental structures, temples or palaces

Another astonishing fact that has surprised the researchers is the absence of any structure which can be thought of central importance like a palace or a temple. The presence of a temple or a palace is a standard feature of every other early civilization. There are several public buildings like the Great Baths and granaries but no structure can be even remotely related to a palace or temple. This has made some scholars to believe that Indus Valley cities were an egalitarian society.

39. No imagery or evidence of Warfare

There have been no imagery or evidence of any war-like activities throughout the civilization nor there were any weapons found in the cities. This makes us think that they were probably a peaceful society. Compared to Mesopotamian city-states, who were at constant wars with each other and depicted their battles in their art and written works, no such image of Harappan cities has been found.

40. We know nothing about political structure or religious beliefs

Very little knowledge of their political and religious hierarchy has been found. We don’t know whom they worshiped or how they worshiped. There have been various debates regarding the same but it is difficult to say anything for certain.