NextBridge of Rama: Traces of an Ancient Advanced Civilization
Archaeology

Brahmi is the earliest Indian alphabetical script. The origin of the script is still much debated, but according to most scholars it is connected to the much older and as-yet undeciphered Indus script. As per its regional variations, it is identified as Tamil-Brahmi, Asokan-Brahmi, Northern-Brahmi, Southern-Brahmi and Sinhala-Brahmi. All modern Indian scripts are the evolved forms of Brahmi.

Inscriptions have been found on cave beds, pot sherds, Jar burials, coins, seals, and rings. Due to overseas trade, few pottery pieces and a touchstone bearing personal names in Tamil-Brahmi script are recently noticed in Arab countires Egypt and Oman.

A few years ago, a broken storage jar with inscriptions in Tamil Brahmi script has been excavated at Quseir-al-Qadim, an ancient port with a Roman settlement on the Red Sea coast of Egypt. This Tamil Brahmi script has been dated to first century B.C. The same inscription is incised twice on the opposite sides of the jar. The inscriped text is “பானை ஒறி” (paanai oRi) which means ‘pot suspended in a rope net’. 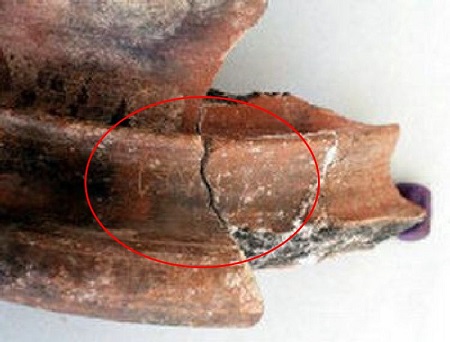 A pottery specialist at the British Museum, London, identified the fragmentary vessel as a storage jar made in India.

Iravatham Mahadevan, a specialist in Tamil epigraphy, has confirmed that the inscription on the jar is in Tamil written in the Tamil Brahmi script of about first century B.C.

According to Mr. Mahadevan, the inscription is quite legible and reads: paanai oRi, that is, ‘pot (suspended in) a rope net.’

Yet another 1900 years Tamil-Brahmi script inscribed on a potsherd was found at the Khor Rori area in Oman. The script reads “nantai kiran” and it can be dated to the 1st century CE.

Found by The Italian Mission to Oman during its second archaeological excavation in 2006 in the Khor Rori area, this potsherd was deciphered when the piece came for a pottery exhibition in Kerala in September 2012.

The potsherd was found in a residential area of Sumhuram city in a layer mixed with a few pottery pieces and animal bones.

The potsherd found in Oman in 2006. –Image Source

“Potsherd could be dated to first century CE or a little earlier. There was so much of Indian material, including beads, coins and pottery, discovered during the excavation that it was important to show the relationship between India and the southern coast of Oman,” said Alexia Pavan, an Italian archaeologist, who found this potsherd.

The text nantai kiran is a fragment or a complete personal name in two words. The last word that could be read as Kiran, is a popular personal name in Tamil, since very early times. There were many poets of the Changkam corpus who had that name. According to archaelogists, the broken piece of the pot carries the personal name of an important trader who commanded a high regard in the trading community.

The port of Sumhuram could be dated to circa third century BCE to fourth century ACE.  The discovery in the ancient city of Sumhuram has opened a new chapter in understanding the maritime trade of the Indian Ocean countries, according to specialists in history.

It was generally believed that India’s contact with the Mediterranean world began with the Roman trade and much of the studies were concentrated on the Red Sea ports such as Quseir al-Qadim and Berenike, both in Egypt. The latest discovery in Oman was significant as it opened a new avenue in understanding the impact of the Indian Ocean trade, particularly on the west coast of the peninsular India.

These discoveries provided material evidence to corroborate the literary accounts by classical Western authors and the Tamil Sangam poets about the flourishing trade between the south India and Rome (via the Red Sea ports) in the early centuries A.D.

Tamil Brahmi script is also noticed in other countries like China, Sri Lanka, Myanmar and Thailand.

Potsherd with Tamil-Brahmi script found in Oman –  The Hindu