NextTsunami might have destroyed Harappan port town of Dholavira
Temples

Beauty in ruins: The Sun Temple at Konark

The Konark Sun Temple is a 13th-century Hindu temple dedicated to the sun god. Shaped like a giant chariot, the temple is known for the exquisite stone carvings that cover the entire structure.

One of the most important temples dedicated to the Sun god in India — the Konark Temple — shares the brilliance and the dazzle of the sun with its fascinating architecture, exotic sculptures and intriguing social history of medieval Odisha. Located in Konark, 35 km from Puri, the abode of Lord Jagannath, this 13th-century temple is a leading Hindu pilgrimage centre.

Konark got its name from two Sanskrit words — kona and ark — with the former meaning corner and the latter implying the sun. Experts say the Sun god worshipped in Ark Kshetra is called Konark. Legend has it that after slaying demon Gyasur, Lord Vishnu left all his belongings at several places to commemorate his victory — conch in Puri, disc in Bhubaneswar, mace in Jajapur and lotus in Konark.

Designed as colossal chariot on 12 pairs of giant wheels being pulled by seven galloping horses, carrying the Sun god across the heavens, the temple was built by Raja Langula Narasimha Deva of the Ganga dynasty around 1250 AD.

Seven horses pulling the Sun Temple eastwards towards dawn is symbolic of the seven days of the week; a dozen pair of wheels represent the 12 months of the year and the eight spokes in each wheel symbolise the eight ideal stages in a woman’s day.

These wheels are not normal wheels but show time as well – the spokes of the wheels make a sundial. One can analyze the exact time of the day by just looking at the shade cast by these spokes.

The Wheel of Life at Sun Temple Konark. img source

The beauty and aesthetics of the temple is best summed up by India’s noble laureate Rabindranath Tagore, who wrote about Konark:

The placement of the main temple and the Sun God had been aligned in such a way that the first ray of the Sun from the coast would cross the Nata Mandir (Dancing Hall) and would fall & reflect from the diamond placed at the crown of the Sun God.

The temple consists of a vimana (main temple) for housing the deity, Jagamohana, a prayer and an offering hall for worshippers and a nirtya-mandapa (dancing hall). The main entrance faces the eastern side which faces the sea. Konark Temple is an epitome of Kalinga architecture.

The entrance is guarded by two huge lions, each killing a war elephant and beneath the elephant is a man. While the lions represent pride, elephants represent wealth and both of them consume man akin to the conquest of spiritual power over worldly power and the symbol of ignorance conquered by knowledge.

Other sculptures decorating the temple’s exterior include deities, animals, floral patterns, voluptuous women, mythical beasts and aquatic monsters. The 24 giant wheels are beautifully carved and each of the eight spokes bears a medallion containing figurative carvings.

Originally built on sea shore, the temple is also known as black pagoda due to its dark colour and was used as a navigational landmark by ancient sailors to Odisha.

The uniqueness of the Sun Temple of Konark lies in the fact that it was built with an architectural setup of various magnets. According to legend, the statue of the Sun God inside the temple was built of a material with iron content and was said to be floating in air, without any physical support, due to the unique arrangements of the top magnet, the bottom magnet and the reinforced magnets around the temple walls.

Other legends state that, the magnetic effect of the lodestone was so strong that it caused disturbance in the ships compasses those passed by the coast (Konark being a major port at that time), thus making the navigation very difficult for the sailors. To save their trade and their ships, the Portuguese sailors destroyed the temple and took away the lodestone. The removal of the lodestone leads to the collapse of the main temple structure.

The Konark Temple is part of ancient Surya cult that flourished across India and was dedicated to the worship of the Sun god. The sun is held as the soul of whole manifestation, primal cause of this universe and its different cycles of manifestation and annihilation. Suryopanishad — a scripture on the Sun god — summarises the significance of the sun and the importance of its worship, saying, “From the sun arises all beings. The sun sustains them all. They all vanish into the sun…” It asserts that the sun is the creator, protector and destroyer. 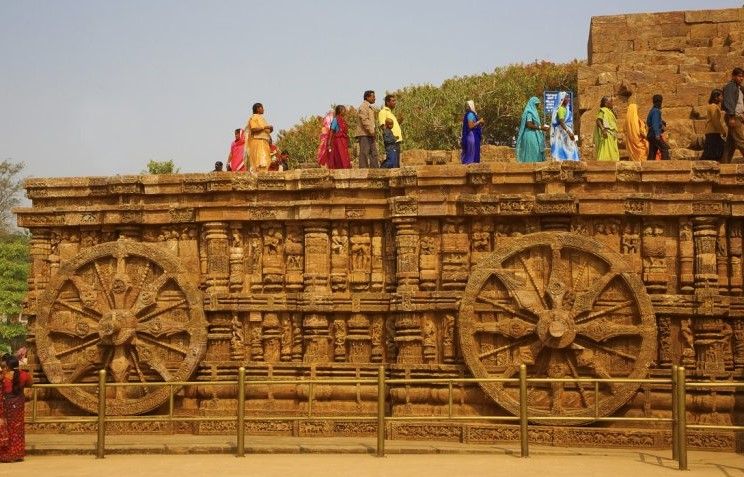 There have been several proposed theories for the collapse of the main sanctum.

As per one theory, part of the Konark temple collapsed because of its incomplete structure. The Konark Sum Temple was not completed because of the early death of the king Langula Narasimha Dev who initiated the construction of the temple.

Next is the theory of lodestone located at the top of the temple. Due to its magnetic effects, vessels passing through the Konark sea were drawn to it, resulting in heavy damage. Other legends state that magnetic effects of the load stone disturbed ships’ compasses so that they did not function correctly. So, to remove the cause of the trouble, Portuguese voyagers stole the lodestone. The displacement of the lodestone led to total imbalance and so the Konark temple fell down. But there is no historical record either of this event or presence of such a great lodestone at Konark.

As per another very popular theory, the temple was destroyed by Kalapahad (a Muslim governor Sultan Sulaiman Karrani of Bengal) who invaded Odisha in 1508. He had also destroyed many other Hindu temples in Orissa along with the Konark Sun Temple.

Other proposed causes include lightning and earthquake. Over the centuries, the sea receded, sand engulfed the building and salty breezes eroded the stone. It remained buried under a huge mound of sand until the early 20th century, when restoration began under the British.