Sikh Soldiers – The Forgotten Heroes of World War I

With the outbreak of war in Europe, India, the Crown Jewel of the British Empire, joined the Allies in battle on the 4th of August 1914. Contributing the most volunteers of any of the British imperial holdings that fought in the war, India produced between 900,000 to 1.5 million troops for combat by 1919. One in six men in the British Empire forces was from India.

Who can forget the heroism of Sikhs in the battlefields of World War I. Sikh formed 20% of the Indian Army even though they were only 1% of the Indian population in 1914. Known as the Lions of the Great War after the war, during the war they were often called the Black Lions.

Around 1,30,000 Sikhs served in WWI and fought in the battles of Ypres, Flanders, the Somme, Gallipoli, East Africa, Palestine, Egypt / Suez Canal, Mesopotamia, and numerous other battlefields in nearly all theatres of the war.

In the first battle of Ypres at Flanders in 1914 a platoon of Dogra Sikhs died fighting to the last man, who shot himself with his last cartridge rather than surrender.

After the bloody battle of Neuve Chapelle in 1915 the Sikh regements had lost 80% of their men, 3 regements stood at only 16% of their original compliment.

“It was the dark days of 1914 when our men had to face mortars, hand grenades, high explosive shells for which they themselves were not provided. They could reply only with their valour, their rifles and two machine guns per batallion. And yet they did it.”- Lt. General Sir James Wilcox, Commander of the Indian Corps

It is also said that some Sikh, captured in Belgium, were believed to have been Muslims by the Germans and taken to Turkey to fight along side their fellow ‘Mohammedans‘. However, they still remained loyal to the British Crown and escaped on a long trek to the British posts in Afghanistan, from Turkey through the Middle East, to once again fight under the British flag.

Though being paid a mere 11 rupees a month for his services to the Empire, Many Sikh soldier, however, also saw it as their duty to bring honour to their clan or caste, by fighting bravely on the battlefield. Some communities liked to imagine themselves as warriors.

A Sikh soldier, Indar Singh, fighting on the Somme in September 1916, wrote home:

It is quite impossible that I should return alive.  [But] don’t be grieved at my death, because I shall die arms in hand, wearing the warrior’s clothes.  This is the most happy death that anyone can die.

As Sikh soldiers were shipped out to faraway lands as part of the British Indian Army to fight the Great War, the British felt it necessary to nourish Sikh fanaticism by allowing the Sikhs areas to set up temporary Gurudwaras (Sikh Temples). Sikhs were allowed to take the Guru Granth Sahib, their Holy Book and Spiritual Guide with them as well as musical instruments for Kirtan, the singing of the Holy hymns which they regularly did in their base camps wherever they were posted.

Sikhs were also allowed to use traditional Sikh weapons such as Chakrams and Talwar swords. It reminds Sikhs of their commitment to fighting injustice and oppression in any form.

A letter home from a Sikh soldier:

“Thousand and hundreds of thousands of soldiers have lost their lives. If you go on the field of battle you will see corpses piled upon corpses, so that their is no place to place or put hand or foot. Men have died from the stench. No one has any hope of survival, for back to Punjab will go only those who have lost a leg or an arm or an eye. The whole world has been brought to destruction.”

War memorial The Chattri in the city of Brighton and Hove. It stands on the site where Indian soldiers were cremated during the First World War –Image Source 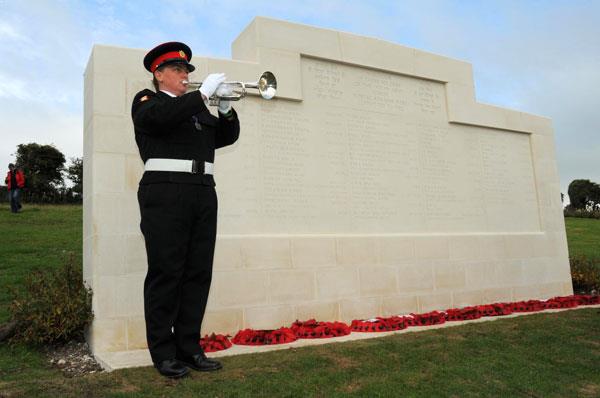 Official figures suggest that 64,449 Indian soldiers died in the war. One Indian soldier, doubting that he would survive, consoled himself with the thought that his name would be written in letters of gold and inscribed in the list of the brave. The names of all of India’s known war dead were indeed carved on the main memorial to the Indian Army, the massive arch of India Gate in New Delhi. The Indians were also commemorated on the Western Front itself. There are many Indian names on the Menin Gate at Ypres.

100 years after the First World War, the Indian Army’s significant role was acknowledged by British. The British army has honoured the contribution made by Sikh soldiers during World War One.