A Vimana is a word with several meanings ranging from temple or palace to mythological flying machines described in Sanskrit texts like Yajurveda, Mahabharata, Samarangana Sutradhara, Rigveda, Ramayana and even older ones. As well as being able to fly within Earth’s atmosphere, Vimanas were also said to be able to travel into space and travel under water.

Vimanas, of various shapes and sizes and with two or more engines, were sophisticated flying machines equipped with deadly weapons, and though they were used for ordinary travel and transports, their main purpose was warfare. Vimanas can fly at great heights with the aid of quicksilver and a great propulsive wind. These Vimanas could apparently travel vast distances and manoeuvre upwards, downwards and forwards.

Some Vimanas were saucer-shaped while others were cigar-shaped. The Vimanas – often described as shining flying cars, or celestial cars – were kept in a Vimana Griha, a type of hanger.

The Vedas, ancient Hindu poems, thought to be the oldest of all the Indian texts, describe Vimanas of various shapes and sizes: the Ahnihotra Vimana with two engines, the Elephant Vimana with more engines, and other types named after the kingfisher, ibis and other animals. According to Veda the Surya dev (God of Sun) and Indra (God of thunder) and several other Vedic deities are transported by flying wheeled chariots depicted to be pulled by animals, usually horses.

In 1975, Swami Dayananda Saraswati concluded, after having studied the Rig-Veda that flying machines did exist in ancient India. In his work entitled “Rigaveda Bhashya Bhumika”, he mentions aircraft in the Vedic mantras that:

is going from one island to another with these crafts in three days and nights… and just an intelligent people constructed ships to cross oceans… jumping into space speedily with a craft using fire and water… containing 12 stamghas (pillars), one wheel, three machines, 300 pivots, and 60 instruments… 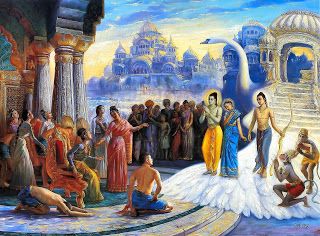 In the Ramayana we have descriptions of a special airplane called Pushpak Vimana. The plane originally belonged to Kubera, who was half brother of Ravana, the demon king and arch villain in the story of Ramayana. Pushpak Vimana was built by Vishwakarma (a celestial architect) under the orders of Brahma (God of Creation). The Pushpaka Vimana was a gigantic plane, of the size a large city entirely, capable of holding unlimited number of people.

Unfortunately, sometime later Ravana stole the ship from him and began using it for his own wicked ends. He used it to even kidnap and carry away Sita (Wife of King Rama) to his capital Lanka. He also used it in his war against Rama. After he was killed in the final battle, his brother Vibhishana, who succeeded him as king, suggested Rama to use the plane to go back home (Ayodhya) without losing further time.

In the Mahavira of Bhavabhuti, a Jain text of the eighth century culled from older texts and traditions, we read:

An aerial chariot, the Pushpaka, conveys many people to the capital of Ayodhya. The sky is full of stupendous flying-machines, dark as night, but picked out by lights with a yellowish glare

It is evident that ancient Indians flew around in these Vimana, all over Asia, to Atlantis presumably; and even, apparently, to South America. Writings found at Mohenjo-daro in Pakistan is uncannily similar to the Writing found on Easter Island, called Rongo-Rongo writing.

In the Mahabharatra, an individual named Asura Maya had a Vimana measuring twelve cubits in circumference, with four strong wheels.

The Mahabharata also mentions the use of flying chariots powered by lightening, capable of flying long distances into the solar system and beyond. There are descriptions of a king Salva using a flying machine to attack Dwaraka and how Lord Krishna fought with him and destroyed the flying machine.

Interestingly in the Mahabharata we also find information about the terrible weapons belonging to the ancient Indian Gods that, in the light of our present day knowledge, do sound uncannily like nuclear weapons.

In the epic Srimad Bhagavatham (sixth Canto, Part 3) we come across the following reference:

One time while King Citaketu was traveling in outer space on a brilliantly effulgent airplane given to him by Lord Vishnu, he saw Lord Shiva… The arrows released by Lord Shiva appeared like fiery beams emanating from the sun globe and covered the three residential airplanes, which could then no longer be seen.

Another work called the Samarangana Sutradhara contains 230 stanzas that are devoted to flight. It describes in detail, every possible aspect of flying. The International Academy off Sanskrit Research in Mysore, India, conducted a study of this ancient texts and published its findings in a book called ‘Aeronautics, a manuscript From the Prehistoric Past’. The following are a few translated excerpts from the text:

The body must be strong and durable and built of a light wood [Lagha-daru], shaped like a bird in flight with wings outstretched [mahavinhanga]. Within it must be placed the mercury engine, with its heating apparatus made of iron underneath.

In the larger craft [Daru-vimana], because it is built heavier, [alaghu], four strong containers of mercury must be built into the interior. When these are heated by controlled fire from the iron containers, the Vimana possesses thunder power through the mercury. The iron engine must have properly welded joints to be filled with mercury, and when the fire is conducted to the upper parts, it develops power with the roar of a lion. By means of the energy latent in mercury, the driving whirlwind is set in motion, and the traveller sitting inside the Vimana may travel in the air, to such a distance as to look like a pearl in the sky.

In 1875, the Vaimanika Shastra, an ancient Indian text written by Sage Bharadvaja, using even older texts as his source, was rediscovered in a temple in India. It dealt with the operation of Vimanas and included information on the steering, precautions for long flights, protection of the airships from storms and lightening and how to switch the drive to “solar energy” from a free energy source which sounds like “anti-gravity.”

Later in 1895 Shivkur Bapuji Talpade, a Hindu scientist attempted to construct a flying machine – called Marutshakha – based on an ancient text’s instructions, which traveled 1800 feet before crashing to earth. 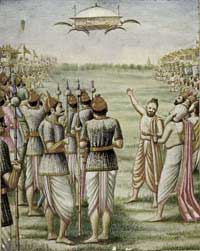 Vaimanika Shastra was rewritten by Pandit Subbaraya Shastry (1866–1940), who dictated it during the years 1918–1923. It contains 3000 shlokas in 8 chapters which Shastry claimed was psychically delivered to him by the ancient Hindu sage Bharadvaja. According to the Vaimānika Shāstra, the Vimanas of the ancient texts were actually true aerodynamic flying machines. Text contain details of the construction of these unbreakable machines, as well as a number of secrets, such as turning the machines invisible, making them motionless, and performing supernatural abilities like causing your enemies to lose consciousness or photographing the insides of their planes. Text also describes in detail, the construction of what is called, the mercury vortex engine the forerunner of the ion engines being made today. The text was translated to Hindi in 1959, and later to English in 1973.

Sixth book written by Nine Unknow men, a secret society founded by Emperor Ashoka, contain secret of Gravitaion. This book, known to historians, but not actually seen by them dealt chiefly with “gravity control.” It is presumably still around somewhere, kept in a secret library in India, Tibet or elsewhere (perhaps even in North America somewhere). Ashoka kept work secret because he was afraid that the advanced science catalogued by these men, would be used for the evil purpose of war. The “Nine Unknown Men” wrote a total of nine books, presumably one each.

It is claimed that a few years ago, the Chinese discovered some Sanskrit documents in Lhasa, Tibet and sent them to the University of Chandrigarh to be translated. Dr. Ruth Reyna of the University said recently that the documents contain directions for building interstellar spaceships!

A few years ago, reports surfaced on the Internet of a Vimana discovered by the United States military in a cave somewhere in Afghanistan. As incredible as that, itself, sounds, the Vimana was also allegedly encased in a “time well,” leading to the disappearance of at least eight soldiers who attempted to retrieve it.

Many think they were talking about ancient UFOs, others say is pure myth. Still, not only these are precise descriptions, of machines, but one can also find an astonishing resemblance in the new NASA vehicle , Dragon, launched by SpaceX. 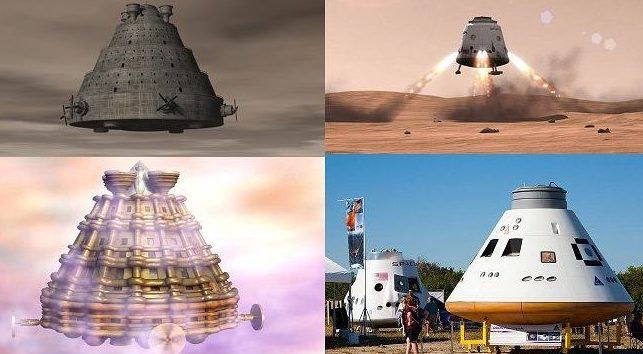