NextWhy Japanese religion is similar to Hinduism?
Myths and Legends

Lost City Discovered In Honduras Could Be The City of Hanuman

Locating at the Mosquitia region of eastern Honduras in Central America, La Ciudad Blanca, which translates from Spanish as ‘The White City’ is a legendary settlement.

One of the days when Charles Lindberg took a flight across the jungles of Mosquitia in Honduras, he found local people worshipping huge monkey sculptures in the ‘lost city of monkey Gods’, according to some legends. Following his descent and exploring Lindberg’s accounts, Theodore Morde – an American adventurer – is claimed to have found that lost city in 1940. When he reached there, he found how local Indians were praying the gigantic idol of an ape and making sacrifices in the name of the monkey God, according to his journals. However, he died in London in a car and the location details died with him. Originally, Morde had been looking for the White City, a hidden city filled with gold and refuge of gods, as reported by Hernan Cortez.

Evidence of a plaza dotted with ancient pyramids have been found by researchers from the University of Houston and the National Center for Airborne Laster Mapping and is now reclaimed by the jungle on the east side of Honduras. On the western end, there is a city of Copan, the site of ancient Howler Monkey God statue.

What’s interesting is that the statue resembles the Hindu character – Hanuman from the Ramayana. 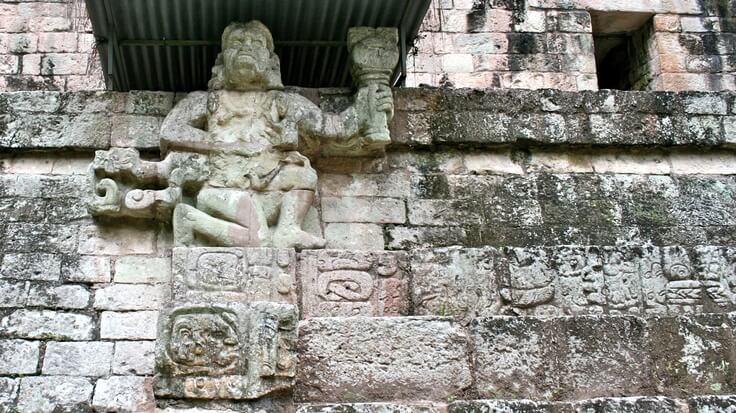 In the Ramayana, Kishkinda Kanda tells the story about the Trident of Peru in South America, and also about Yuddha Kanda, a war episode where Hanuman travels to Paatala Loka, somewhere in Central America and Brazil, trying to meet his son Makaradhwaja, who resembled him.

Having killed King of Paatala, Hanuman announces his son as the ruler of that kingdom. It is assumed that his son and the entire kingdom might have started to worship Hanuman as a God ever since. It might also be that the ancient Americans in the central and southern regions paint red colors in all their statues, pertaining to the Hanuman idols that are smeared in orange.

There is also a case where Vedic Havan Kund was discovered in Peru, an evidence of Vedic influence in this region.

In his journals, Morder describes how he traveled through swamps, up rivers, and over mountains before coming up in the city will walls. He writes about large, ruined buildings, and also about how Paya guides told him about a large staircase leading to the statue of a ‘Monkey God’. Morde had speculated the resemblance between that Monkey God and Hanuman, who again is considered to be related to the legend of Paul Bunyan, in terms of strength and daring characteristics. The temple was told to have “long, staired approach” with stone effigies of monkeys. “The heart of the temple was a high stone dais on which the statue of Monkey God rested. Before it was a place of sacrifice,” reads the words.

There are immense balustrades flanking to the steps of the dais, according to some. “At the beginning of one was the colossal image of a frog, at other a crocodile.” He also reveals that the guides told him that Chorotegas inhabited the city thousands of years ago.

Morde is also seen relating a story where a monkey stole three women and had them bred his children, resulting in half-monkey, half-human children. He claims, “The native name for the monkey is Urus, which translates literally as “sons of the hairy men”. Their fathers, or forefathers, are the Ulaks, half man and half spirit, who lived on the ground, walked upright and had the appearance of great hairy ape men.”

Morde tried to return back to the city, but couldn’t. In 1954, he killed himself. The reasons are yet to be known. But what is known is that the City of the Monkey God, Hanuman exists somewhere in the world.