Assam was the only State in India which defeated successive attempts at invasion by the Delhi Sultans and the Mughal Emperors. The state survived 17 invasions.

Lachit Borphukan and many other brave kings and generals ensured that the North East of India remained free from the Muslim invasions.

In the mid 1600s the Mughal Empire was in the noontide of its glory – one of the greatest and largest empires in the world with a power army to match it. By force and conciliation it had overrun a large part of India before their fanatical policies of religious persecution led to a series of uprisings and revolutions that brought the entire empire crashing into the dustbin of history.

Popularly referred to as Momai Tamuli, the first Borbarua and also Commander-in-Chief of Ahom forces during the reign of King Prataapa Singha. Momai Tamuli ensured that his son Lachit was properly educated in the disciplines necessary for nobility. After the completion of his formal education, Lachit was appointed as the scarf bearer of the Ahom Swargadeo, a post equivalent to that of a private secretary.

From his father, Lachit had inherited an unwavering sense of duty, involvement and loyalty. He now immersed himself completely in the preparations for the war. He was a harsh taskmaster, but very sincere to his job that he did not hesitate to behead even his uncle, who was found to be negligent on duty during an important situation of the war.

Statue of Lachit Borphukan (in the middle) at Sivasagar with other Ahom Warriors. img source

In August 1667, Lachit accompanied by Atan Burhagohain lead the Ahom warriors towards Guwahati. In November 1667, he captured the Itakhuli fort and later drove the Mughal forces beyond Manas after taking the faujdar Firruz Khan as prisoner.

In December 1667, the tyrant Aurangzeb was informed of the defeat of the Mughal forces at the hands of Ahom warriors. He ordered a massive army commanded by Raja Ram Singh to attack and subdue the Ahoms. Aurangzeb added an additional 30,000 infantrymen, 21 Rajput chiefs with their contingents, 18,000 cavalry, 2,000 archers and shielders, and 40 ships to Ram Singh’s forces of 4,000 troopers (from his  char-hazaari mansab), 1,500 ahadis and 500 barqandezes.)

Selection of the Battlefield

Lachit Borphukan anticipated such an move by the Mughals. Therefore, immediately after capturing Guwahati he began strengthening the defenses around the Ahom territory. He used the Brahmaputra as a natural perimeter defense and augmented her banks with stockades and mud embankments. He was fully aware that he did not stand a chance against the Mughal troops on the plains. He cleverly choose the hilly and forested terrain just outside Guwahati as his battleground, were the Ahom warriors had an advantage over the Mughals.

Siege of Guwahati and the Alaboi 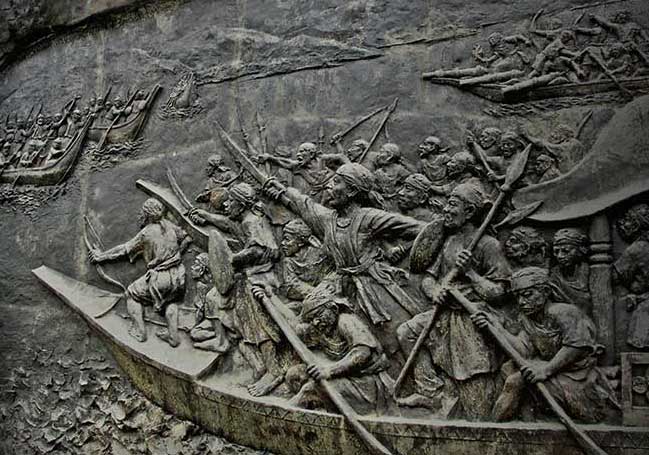 Lachit Borphukan leading the advance on the Brahmaputra. –img source

The Mughals tried to sow dissension among the Ahoms through trickery. They shot an arrow into the Ahom camp with a letter addressed to Lachit. In that letter, the Mughals offered to pay Lachit one lakh rupees and urged him to evacuate Guwahati. This incident was informed to the Ahom king, which raised doubts in his mind about the loyalty of Lachit. Atan Burhagohain quelled the king’s doubts about Lachit’s loyalty.

Followed by this the Mughals lured the Ahoms for a confrontation on the plains. The Ahom king urged Lachit to take this up as a challenge. A small force of Mughal troops commanded by Mir Nawab was to engage the Ahom warriors at Alaboi. The Ahoms had made elaborate preparations and concealed their reinforcement in trenches. This helped the Ahoms capture Mir Nawab and rout his troops. The Mughals enraged by this defeat let loose their entire forces on the Ahoms that led to a massacre of 10,000 Ahom warriors.

Lachit withdrew his forces up to the Itakhuli fort after this major setback. While the war was raging on, the Ahom king Chakradhwaja Singha died. He was succeeded by Udayaaditya Singha. Observing that none of the Mughal strategies were successful, Ram Singh offered the Ahoms 300,000 rupees to give up their claim on Guwahati and return to an earlier treaty agreed in 1639. However, this was fiercely opposed by Atan Burhagohain, who raised the suspicion that the tyrannical emperor of Delhi may not abide by this proposal.

Meanwhile, Munnawar Khan, the Mughal admiral joined Ram Singh, with a rebuking message from Aurangzeb to make war with the Ahoms and not friendship. Ram Singh was now forced to move in full strength against the Ahoms. He was informed of a breach in the embankment near Andharubali. At this time, Lachit was down with severe illness and could not actively oversee the battle preparations.

The Ahom army was demoralized after their defeat at the hands of the Mughals in the previous battle at Alaboi. When they saw the huge enemy boats looming nearer, they were devastated and were on the brink of deserting and fleeing the scene. Sensing this, Lachit immediately ordered a flotilla of seven boats to be prepared for him and forced himself from the sickbed and on to the boats. He firmly stated that regardless of what happens, he will never desert his country. Seeing their general back on foot and hearing his words gave the Ahoms a big morale boost. All soldiers rushed to Lachit’s side and their numbers swelled immediately.

The Ahoms launched their small boats and Lachit led them to a head on confrontation with the Mughals in the middle of the river. The smaller Ahom boats had greater maneuverability as opposed to the large Mughal vessels. The Mughal boats were stuck in the water unable to navigate efficiently. In a closely fought battle, the Mughals were decisively defeated. The Mughal admiral Munnawar Khan was killed in battle. Many of the Mughal commanders and numerous troops were also killed.

The Ahoms chased the Mughals upto the Manas, which was the western boundary of the Ahom. Lachit also instructed his troops to be always alert for counterattacks from the Mughals. All these events are presumed to have taken place in the month of March in the year 1671.

Though Lachit emerged victorious in the war against the Mughals and restored the glory and dignity of Ahoms, the strains of war had taken their toll on him. He never recovered from his illness and died an year later in April 1672.

He was put to rest at the Lachit Maidan built by the King Udayaditya Singh at   Hoolungapara in 1672. His statue was unveiled at the National Defense Academy at Khadakwasla in 2000 by then Governor of Assam, Lt. Gen. S K Sinha. Every year the best cadet passing out of the Academy is awarded the Lachit Medal . Nov 24th is commemorated as Lachit Divas in remembrance of this heroic son of Maa Bharati.