Bhaja Caves is a group of 22 rock-cut Buddhist caves located in Pune District in Maharashtra, India. The rock-cut caves are situated 120 m above the mountain with beautiful architecture, sculptures, and painting. These Buddhist shrines are believed to date back to as far back as the 2nd century BC, when the Theravadin (a branch of Buddhism that adheres to Pali scriptures and the nontheistic ideal of self-purification to nirvana) phase of Buddhism was still in its earliest stages. The time when the caves were chiseled coincided with the period when the Mauryans were still ruling over India. These caves are similar to the ones found in Ajanta and Karla

The caves found at Bhaja are approximately 22 in number and have been dedicated to Lord Buddha. Throughout the caves, one can see exquisitely chiseled images of the Lord Buddha. Amongst these are the ones that represent Lord Buddha in a symbolic form, while others have been based on the events that took place in His Life. They include a mound that symbolizes his death and a throne that reminds one, of the life he led as a prince.

Apart from that, we have the carvings depicting lotus or elephant, which symbolize His birth. The Bodhi Tree, under which Lord Buddha ultimately attained Nirvana, has also been chiseled on the walls of the Bhaja Caves.

The most unique characteristic of the caves is that the beam of light of the setting sun enters the insides of the caves.

Stone carvings in Bhaja caves are not very deep, style is similar to the one of the moulded terracottas. The sculptures feature elaborate headdress, garlands, and jewellery; they might have originally been painted in bright colors but later covered with plaster. On the southern region of the caves there are sculptures of human figures and deities. There are many mythological tales that revolves around these images and sculptures.

These caves also provide important proof regarding the history of the Tabla, an Indian percussion instrument, since carvings from 200 BCE show a woman playing tabla and another performing a dance.

There were several caves surrounding the main hall with narrow aisles and lanes. On each side of the central shrine cave the architecture is a near-perfect mirror image of the other side.

The most impressive feature of the Bhaja Caves is its large chaitya (prayer hall), believed to be one of the earliest of its type and featuring a horseshoe-shaped entrance and depictions of Indian mythology. It is the biggest of all caves and comprises of a prayer hall within its premises.

Bhaja caves also include a number of viharas within their complex and these are, today, being used as residence by Buddhist monks, who are receiving their education here. The other awe-inspiring features of the Bhaja caves is a group of 14 stupas, five inside and nine outside an irregular excavation. The stupas are relics of resident monks, who died at Bhaja, and display an inscription with the names of three monks, Ampinika, Dhammagiri and Sanghdina. 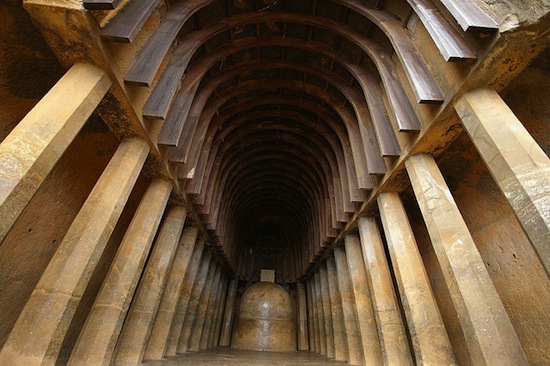 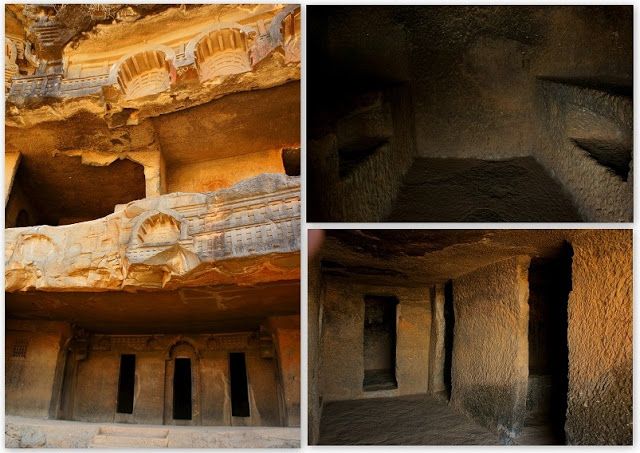