A  5,000 years old stepwell has been discovered in one of the largest Harappan cities, Dholavira, in Kutch. Dating back to bronze age, the site represents the largest, grandest, and the best furnished ancient water reservoir discovered so far in the country. It’s rectangular and 73.4m long, 29.3m wide, and 10m deep and almost three times bigger than the Great Bath of Mohenjo-Daro, which is 12m by 7m by 2.4m. Archaelogists are hopefull that the reservoir might be listed with the UNESCO. Another site, the Rani ki Vav in Patan, is listed with the UNESCO already.

Experts will now start researching for the technology used in this Harappan stepwell as they say that there is a highly advanced hydraulic engineering that has been used here. The team will be using remote sensing technology, 3D laser scanner and ground penetrating radar system. How did water flow into the well? What was the idea behind water conservation? These are some of the questions that will be probed. 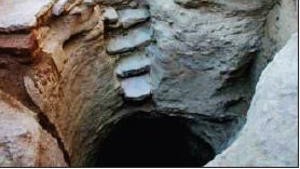 The stepwell that was found during the excavation. – Image Source

Various tanks, stoneware, finely furnished brick blocks, sanitation chambers and semi-precious stones such as carnelian, which were in great demand during the Harappan era, are expected to be investigated. Gujarat was the centre of bead and craft manufacturing, and agate carnelian beads were very popular.

A study of the internal structures of various forms of pottery will help them to identify the diet of various people here. The pottery typology will show what communities lived here, and what kind of precious copper and bronze artefacts were used.

V N Prabhakar, visiting faculty at IIT and superintending archaeologist, ASI said, “We will conduct spot analysis in December as various surveys have indicated other reservoirs and stepwells may be buried in Dholavira.”

To add further, he said, “We also suspect a huge lake and an ancient shoreline are buried in the archaeological site that’s one of the five largest Harappan sites and the most prominent archaeological site in India belonging to the Indus Valley civilization.”