Share this:
Recently two bronze icons dating back to the Vijayanagar period have been found. The icons of Lord Vitthala and Lord Janardhana were found at the Janardhana temple in Belanje village near Hebri in Karkala taluk.
The icon of Lord Vitthala is 28 cm in height and stands on a lotus pedestal, while the icon of Lord Janardhana is 18 cm in height. Both icons were found by T. Murugeshi, associate professor in ancient history and archaeology.“From the standpoint of iconography and chronology, the icon of Lord Vitthala is a good specimen for study,” Prof. Murugeshi said.
The icons are mentioned in the dated, but incomplete, inscription found in the temple. The inscription dates back to 1404 A.D. and it mentions Pandarideva as the Governor of Barkur province under Harihara II of the Vijayanagar dynasty.
It also states the direction given by a prince, Mallikarjuna, to provide 630 gold coins and nine ‘murras’ of rice (one ‘murra’ of rice is equal to 38 kg) to the temple for the purpose of worshipping Lord Vitthala at Brelinje, which is the present day Belanje village. 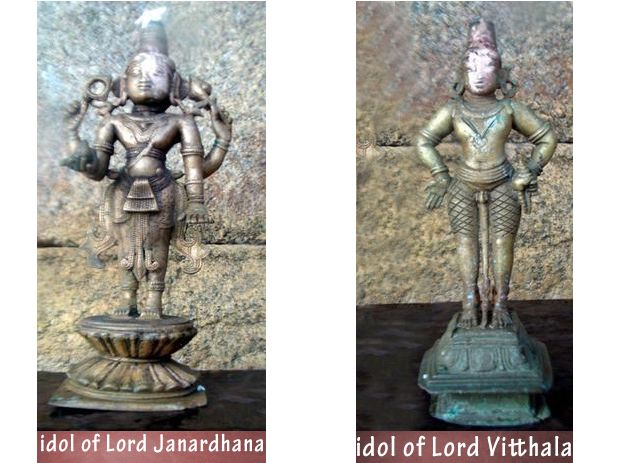 The bronze idol of lord Vitthala and Lord Janardhana found at the Janardhana Temple. Image Source

Lord Vitthala is generally considered a manifestation of the Lord Vishnu or his avatar Krishna. It is believed that Lord Krishna had incarnated at the end of Dwarpa Yuga on the eighth day of the dark fortnight in the holy month of Shravan (As per the Hindu calendar). He is also known as Panduranga and Vithoba.
The word Vitthala is said to be derived from the Kannada (a language spoken in the southern parts of India ) word for Lord Vishnu. He worshipped predominantly in the Indian states of Maharashtra, Karnataka, Goa, Telangana and Andhra Pradesh. The worship of Lord Vitthala has been derived mainly from the Puranas (ancient Hindu texts).
Featured Image and Source: The Hindu